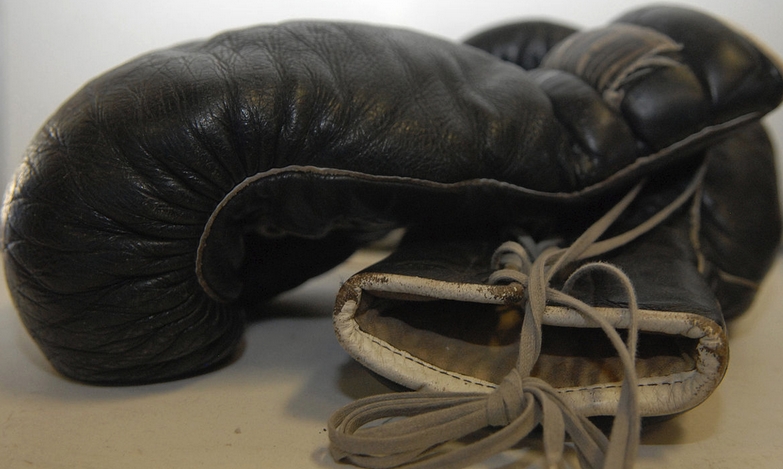 History of boxing gloves stretches from an extreme antiquity. About their initial form, we learn, first of all, from pictures of that time and sculptures and descriptions of the poet Homer. The first analogs of boxing gloves appeared in Ancient Greece in the 16th century B.C. when the boxing was ordinary fisticuffs.

How did the first boxing gloves look? 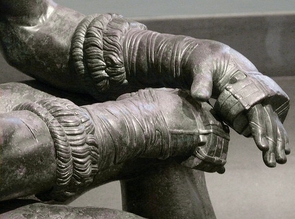 The speech far did not go about boxing gloves known for all in the modern world. In those days hands of fighters shrouded in pieces of crude beef or asinine leather which was fixed on joints by means of simple ropes. Also, soft leather belts met, the fighter shrouded in them and strengthened the fingers, a palm, joints on fingers and wrists. Leather belts had length about 3 meters that allowed to record a fist incredibly strongly.

The purpose of these plain devices and the process of bandaging of fists was, first of all, protection of hands of the fighter against injuries and vice versa, the maximum causing physical damage to the opponent. At this look boxing gloves were presented also at the Olympic Games. The fisticuffs were included in the Olympic program in 688 B.C.

From the 5th century B.C. more and more gladiators began to take part in fisticuffs that made duels crueler and more spectacular. For bigger bloodshed boxing gloves with great pleasure were equipped with nails, needles and other pieces of iron. Belts for a winding of hands already stopped being are made of soft leather, replaced them with firm leather belts. 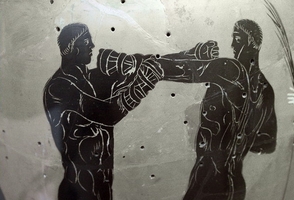 In order that fighters prevented own injuries of hands, under belts the soft piece of matter from wool was enclosed. Gloves, during a so-called gladiatorial era of duels, were a dangerous, destructive element of arms. It is also necessary to note, as the duel had absolutely in those days other format which is very far from today’s essence of sports boxing.

In the 4th century B.C., leather boxing gloves on laces for the first time appeared. Romans, in these gloves, with pleasure sewed up lead bullets and iron plates. The boxing transferred to the gladiatorial arena had no characteristic features of sports discipline anymore and became a brutal type of a fight on a fun to the audience.

Boxing gloves of a new era

The boxing as sport as it stands, for the first time appeared only in the 17th century. At that time, however, it was not regulated by any obligatory rules yet, even no obligatory equipment of the boxer was offered. Use of boxing gloves was not forbidden, however boxers often fought barehanded. 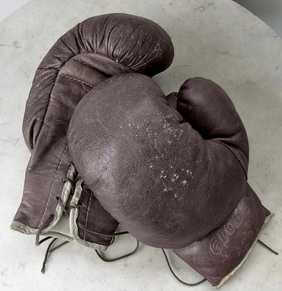 The first set of complex rules of boxing appeared in 1857 and is known under the name of the rules of the Marquess of Queensberry. This code put a basis of rules of modern boxing in today’s understanding. These rules, first of all, regulated equipment of the boxer and stated the principles of use of boxing gloves.

Modern, softer, boxing gloves appeared in the 19th century, thanks to Jack Broughton who invented them for students of the academy. Their purpose was to protect young boxers from sections on a face, bruises and fractures of a jaw. These boxing gloves, however, were never used at regular boxing duels. They only paved the way for creation of boxing gloves known presently. Boxing gloves initially were made of goat leather, and internal filler represented a horsehair. Now for production of gloves of neat’s-leather, and artificial is also used, and as stuffing material serves special foam.

The gloves which are bearing a faint resemblance to present equipment appeared in the 15th century. They were filled with a horsehair and upholstered with leather. Were used only at trainings. On tournaments in England it was accepted to box barehanded.

Boxing gloves took more or less modern form by the 17th century thanks to British – the ancestors of classic boxing. And with his allocation of boxing as independent sport, began to place in them also inserts, making equipment more comfortable and safe.

Gloves for boxing in their present look became obligatory to application in 1867, after introduction in England of rules of boxing of the Marquess of Queensberry. He offered new rules of carrying out duels on boxing which contained point on obligatory application of gloves for the purpose of decrease in traumatism.

Since then gloves began to be subdivided on fighting and training. Modern classification of this element of boxing equipment was replenished with amateur, professional, trainer’s, modifications on lacings and on velcros.