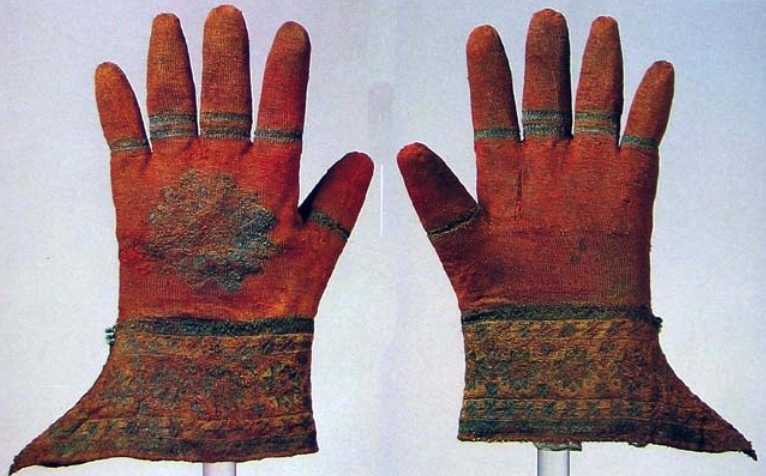 Gloves in modern understanding appeared in X-VIII thousand to our era and they looked rather exotically: small sacks for hands which tied on a wrist. Later in sacks made a special ledge for a thumb. It is considered that in these gloves ancient Egyptians worked and ate not to soil hands.

One of the most ancient gloves were found in Tutankhamun’s tomb. In the Pharaoh’s gloves all fingers were divided. Ancient Greeks did not approve the people wearing gloves including them mollycoddles. Weather in the Balkans, also as well as now, stood quite warm so there was no need in addition to protect hands. Generally, Greeks put on gloves only for work. Homer has a place where Odysseus finds the father in gloves behind weeding of weeds. Unlike Greeks, ancient Romans used gloves not only during especially rough works, but also for protection against cold and during a meal. In dense gloves it was much more convenient to take pieces of the burning food, than barehanded, and they had no tableware.

The Middle Ages and the Renaissance 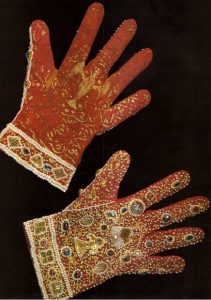 The Middle Ages and the Renaissance became glove cult time. Besides purely functional value it gets also symbolical, becomes attribute of the power – royal, judicial, episcopal. Bishops received it at the introduction in a dignity, knights with it swore on fidelity and received next “promotion”, and representatives of city estate were handed a glove meaning that they were given special privileges. Permission to trade, taxation and stamping of coins was given delivery of a royal glove. Even judges got to work, having only put on gloves.

Well and, of course, absolutely special role of a glove was played in life of medieval knights. The glove said directly meant terrible insult which the duel followed. The glove received from the lady was the sign of her special favor. Having received such gift, the knight did not leave it even at night. Usually such glove was worn in a special sack on a neck or behind a belt.

By the 12th century in Europe there was a special profession – the Glover which was incredibly honorable and well paid. How many it is necessary abilities to sew a glove precisely in a shape of a hand moreover to decorate her with an embroidery or gemstones! Not anyone could afford such work of art. And gloves finally passed into the category of luxury goods: the glove is more refined, the richer and the owner is more influential than it.

Approach of the Renaissance changed nothing. Gloves both were, and remained extremely fashionable and expensive accessory. They were made of linen fabric, silk and, certainly, leather, embroidered gold, silver and pearls.

In the 16th century in many countries rules of etiquette seriously became complicated, and men several times in the course of the day had to take off the close gloves and anew to put on them. In gloves it was not allowed to men: to shake hands, to be at a funeral, festivals and in church. It was recommended to take off gloves also in the presence of the king. And though, meeting requirements of the consumer, gloves began to do freer, some men ceased to wear them on hands, and attached behind a belt.

Such restrictions, fortunately, did not extend to women’s gloves therefore glovers transferred the main attention to them. Satin, lace, gently carried, a button and a monogram, gilded embroideries and appliques… However sharp change of their length became the real sensation in the world of gloves. With emergence in ladies’ clothes of dresses with the short sleeves which were juicy baring hands, women’s gloves were sharply extended. The principle was simple: the sleeve is shorter; the glove is higher. The founder of new fashion all call the English queen Elizabeth I who in 1566 at an official ceremony in Oxford appeared in the gloves reaching almost an elbow. However long gloves managed to win popularity at exacting women of fashion only by the end of the 18th century.

Men’s gloves had not the best times meanwhile. The cause is there was a fashion for the long, almost closing a brush lacy cuffs which appeared at the time of baroque and rococo. To wear at the same time both gloves, and cuffs it was silly and impractical. It was necessary to leave something one, and without thinking twice, men refused gloves. What is characteristic, in equipment of the French musketeers the glove nevertheless remained, but only one… for a hand with which hold a sword. As well modern athletes-fencers use a glove to hold the weapon. What is curious, the glove on one hand is not only in fencing – if you want to be engaged in golf, you will need to buy too a special glove that it was more convenient to hold a club for golf. 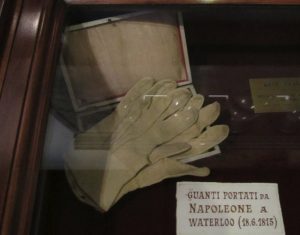 The interest of men in gloves was revived by Napoleon Bonaparte. The great admirer of this addition to a suit, the great French commander considered that gloves give to the man a courageous and aggressive look. According to contemporaries, by 1806 in its collection there were more than 240 pairs of gloves. Napoleon carried them almost round the clock and urged adherents to arrive also. The whim of the favorite of the nation was pleasant to all, and soon men’s gloves became fashionable again. Napoleon’s wife, Josephine, passion of the husband to gloves did not divide, but after all wore them. Most often it was published in very long gloves, and nobody even guessed that the emperor’s wife just wants to hide the ugly hands.

Answering fashionable tendencies of the 19th century, new men’s gloves completely lost jewelry, became strict and ascetic. The main emphasis in them was placed on a cut and quality of material. Rich fops ordered gloves at the same time from several masters from time to time: one cut, another sewed wrists, the third – fingers, and skin was brought in general from abroad. Persons interested to get gloves everything increased, the agiotage increased, and gloves and remained piece goods.

The hard work of glovers was facilitated in 1807 by Englishman James Winter. His machine for tailoring of leather products quickly coped with all orders, and noble misters could change at last gloves depending on weather, clothes and moods.

Women had pleasures. Extravagant gloves without fingers became fashionable. After openwork stockings there were also openwork gloves. And here from wild Russia delivered incredibly soft and elastic kidskin gloves which were sewed from leather of newborn lambs.

By the way, the Russian emperor Nicholas I, the big adherent of an order, once on a ball saw the officer without gloves – inconceivable impudence! The officer responded to a remark of the tsar that he lost gloves. Then Nicholas gave it the.

“Glove” era proceeded up to the end of the 19th century when was considered to go outside without gloves just indecent. Each lady following the fashion had several tens of pairs of gloves in the clothes.

The 20th century placed everything on the places. The most fashionable women’s gloves became goat, men’s – pork, and for sports gloves took leather of dogs. Jewelry for gloves ceased to enjoy special popularity, but made to choosy customers concessions and offered samples with an embroidery, feathers and counterfeit diamonds.

The last splash in interest in gloves ended approximately to the middle of the century. Great actresses of the past Sara Bernhardt, Vivien Leigh, Audrey Hepburn and Marilyn Monroe carried magnificent gloves, and their admirers and fans, wishing to resemble idols, besieged haberdasheries. After a glove become just functional thing protecting hands from cold again. However, from 80th years the world fashion exposes a glove as an obligatory element of clothes again. Rise of production of the elegant leather gloves which again became a fashionable accessory begins.

At exhibitions of haute couture any collection of the famous fashion designers does not do without such important accessory as gloves. Many fashion designers and designers quite often assign to gloves a key part in display – this accessory allows to emphasize competently and favorably uniqueness of the image created by them.
Development of glove production

Since the 17th century the French were considered as the best masters in tailoring of gloves. France historically was the center of glove culture.

As a result of Napoleonic gains, the French production technology of gloves extended across the whole Europe, especially in Naples continuing and to remain today the largest center not only the Italian, but also world glove industry. The Czech Republic, Hungary, Romania became the centers for production of gloves.

Today practically any of the large Western European companies has no own productions in Western Europe, except for small model workshops in which the collection is developed.

Orders are placed at the large industrial enterprises in Eastern Europe and Asia. After World War II appeared and production of gloves on Philippines gained broad development. For the last two decades glove production developed also in China, Indonesia, Koreas, Vietnam. So, Americans, gradually began to move the productions from Philippines to Indonesia, China, Vietnam.

Thus, Asia became the second for the importance in production of gloves by the region. More and more European companies transfer the sewing capacities there. It is quite possible that on the outputs Asia already bypassed Europe. Except already listed countries, gloves sew also in Portugal, Ireland, Spain, Brazil, etc.