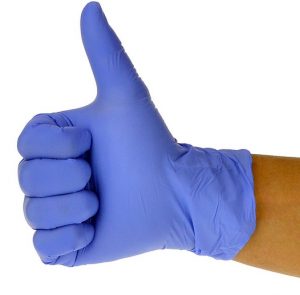 Medical gloves are considered as the most demanded accessories in all spheres of health care. Therefore, a lot of attention by producers of these goods in the market of medicine is paid to their production, quantity, quality and different types.

Let’s begin with the most main types of gloves – surgical which use already very long time. It is necessary to tell that surgical gloves underwent big changes over time. Production workers try to make everything that working gloves became more convenient and protected both the surgeon, and the patient more.

Therefore, now different gloves for the different fields of their use appeared. Surgical gloves from each other differ not only by the size of hands, but also by the gaiter size, powder availability, on film thickness, on material. They are anatomic. Under each hand is issued separately both right and left. Length of such gloves is equal to twenty-eight centimeters. Surgical gloves also release sterile in packing with paper of a film covering or not sterile which do sterile before operation, placing them in the autoclave for forty-five minutes under temperature to hundred twenty-two degrees Celsius. Thus, it is possible to sterilize them no more than four times.

Most often as material of gloves use liquid natural latex, that is juice of a hevea which is brought India, Africa and from Southeast Asia. The way of production consists in the following. At first the shape of a hand becomes. Then she is placed in latex solution, subjected to chemical processing. After such procedure latex becomes rubber.

That gloves did not stick together at their clothing on a hand and for simplification of process of clothing, gloves strew with corn starch. But it is done not for all types of gloves. If gloves are intended for laboratories, then to avoid casual hit of powders in samples of researches, do not use them at all. Rubber gloves from latex natural can quickly become useless during the work with gasoline, oil, solvent. For these purposes use vinyl. As material for gloves also use synthetic latex, but not all its types but only those which do not cause irritation of skin and an allergy. So for example, that who is inclined to allergic reactions, do not recommend to wear gloves from natural latex, and to use only nitrile gloves which are stronger than natural.

More than seventy percent of gloves which are used in medicine are diagnostic gloves. They are three sizes: S, M, L. Their length equals to twenty-four centimeters. They only close a brush of hands and happen to a smooth and rough surface. Such gloves are intended for work with the medical equipment, during the performing of simple works and survey of patients.

Longer gloves use for disinfection. Length of gloves in this case has to be from twenty-eight centimeters.

The diagnostic textured gloves for dentists differ in the fact that add different fragrances to their structure. Therefore, they pleasantly smell. Suppliers of such gloves are the companies Top Gloves, WRP, Ansell Medical, and at us in the country it is the plant of rubber products in Armavir.

There are gloves which protect from cuts and punctures which make on knitting automatic machines of special synthetic thread. They are usually put on rubber gloves and they can be used several times. They are exposed to washing and sterilization in the autoclave. They will protect from cuts, but not from punctures.

And to protect from punctures on finger-tips do special thimbles of a dense and strong grid. Such gloves are imported to us from France, the USA and Italy.

In France there were gloves protecting from infections which consist of two layers, one of which is disinfecting. Even at emergence of a puncture, for example, the disinfecting layer will not allow you to catch.

Thus, it is possible to sum up the results. In medical practice apply diagnostic, surgical, gynecologic gloves and also gloves which protect from cuts and punctures.

The correct work of the health worker also will depend on a right choice of gloves.